Konk was a gaurd captured by the party inside of Kresh’s Lair. They attempted to interrogate him for information, but to little avail. Konk’s capture sparked a heated conflict the divided the party. Without anyway of holding their captive, and without anyway of trusting him, the party decided to kill him. The divide that followed caused bitterness and descent from the party members wishing to release him, and the hard feelings were not easily over come. 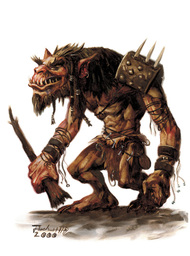