High Chancellor of the Mage's Council of the Arcane Order

Orion Graywing is the High Chancellor of the Mage’s Council of the Arcane Order. He is the son of Ur-Vadadare, king of the dragons, which yields him mighty arcane power, as well as a highly prolonged life. Orion is the only human to sit on the Mage’s Council, and many speculate that his heritage is the sole factor in that decision. He has many enemies upon the council, due mostly to the council’s racism and resentment towards what they feel is undue privilege.

Orion Graywing possess two familiars, which is strangely unique for a mage. They are a pseudodragon named Tah’hua, which he obtained through conventional means, and Mageslayer, a longsword of amazing power given to Orion by a mysterious, divine being and brought to sentience by Lahsguul, king of the dwarven lands. He often will send them on missions in his stead.

Orion is the father of Jarek Graywing. Though it isn’t entirely clear why, their relationship is less than stable.

The party first encountered Orion after reuniting with Jarek. After Jack had unknowingly displaced the Book of Infinite Spells from the royal library of Kord, Orion had become aware of its possessor and rest of the party. Realizing that Mephistopheles was after the book, Orion attempted to make contact with the party, unaware of his son’s involvement in its conception. Discovering his son’s part in the unearthing of the artifact, he quickly set Jarek to rendezvous with the party he recently deserted, accompanied by Tah’hua and Mageslayer. The reunion ended in conflict, and Orion felt it necessary to intervene, consequences or no. He dismissed Jarek and explained to the party his plan: to use them as bait. Mephistopheles is after the book, but cannot be directly observed through scrying. The book can, however, and Orion proposed the party hold on to the book and see what Mephistopheles next move might be. The party accepted, to the promise of a bit of the hoard of Orion’s father. This deal leads to terrible litigation issues with the Council.

The party met Orion for the second time when he again intervened upon a conflicted party, this time also faced against the black dragon Bathal. He easily defeated the party’s enemies and transported them to Helethrane, the floating island-city of the Mage’s Coucil. But upon his arrival, he was immediately arrested by a rival council member, Erit des Porif, on the charge of procedural misconduct and negligence. He was also contacted shortly after his arrest by a dragon diplomat form the Dragon Realms. A trial was soon to take place against Orion within the realm on the charge of murder. When the party last saw Orion, he was awaiting his trials. 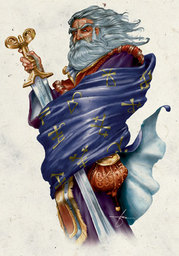