Daredevil Ranger, and agent of Mephistopheles.

A half-elf adventurer from the North of Kord. Roy’s origin is mostly a mystery, but what is known is that the small settlement where he resided was an adopted home, one that he made his own in time. Roy joined the party when their task of finding Mee’Al led them to the outskirts of his town, then being periodically raided by ogre mages and other adventurers searching for the elf loremaster. He bravely defended his home, only to be easily squashed by Jack. Roy became the party’s captive, but upon discovering that they both shared a common goal in locating the missing Mee’Al, he sooned joined them on their quest to track down and locate her. This led the party to the edge of Kord’s north shore, and into Kresh’s Lair.

While the newly formed party fought back the swath of traps and monsters inside Kresh’s Lair, a misuse of Jack’s native tongue by Roy provoked the elf, and soon the two battled each other. Bathal, Kresh’s lieutenant, saw his opportunity to strike as Roy landed the killing blow on Jack, who was then retroactively raised from the dead. Bathal was obliterated by Orion, and he beckoned the party to exit before they landed in serious harm. But Jack was intent on that serious harm, and turned to Roy to finish him inside the lair. Lo, Orion spoke truth, and as Jack fried Roy with an arc of lightning, Kresh revealed himself to the separated and weakened elf. Barely able to escape, Jack rejoined the party without Roy, and his fate was left to the Rakshasa.

Roy never made it out of Kresh’s Lair. Instead, the man who traveled with the party was an extension of Mephistopheles. After the party left Roy to die in the caves, Kresh revealed to the dying half-elf that his magic and his life held Mephistopheles at bay, but fighting the Mages Council on top of the occasional adventuring party was too much strain on his protective wards. He alone had protected Mee’Al to this point, and he would see that through to the end, even if that meant dooming the Material Plane. Kresh vanished before the half-elfs eyes, and soon devils of all sorts began to emerge from the portals within the lair. Roy, unable to move or defend himself, came face-to-face with Mephistopheles.

The doppelganger traveled with the party for several months after the encounter, all the while an agent for the archdevil. He was destroyed by the party on the shore of the Cage Jungle. 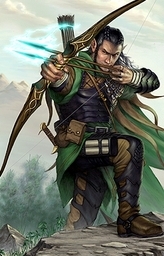